Poke bowls, a Hawaiian dish that’s base is raw fish served over sushi rice. This dish can normally take many new forms and flavors. This recipe kicks it up a notch by adding teriyaki sauce. Arctic char filets are cooked to perfection and brushed with teriyaki sauce. Also served with a fresh carrot, edamame, and ginger salad, quick pickled cucumbers, and sushi rice.

Before you get started cooking you should know a little about the history of Poke. It’s believed that poke was first prepared by native Polynesians centuries before Western travelers arrived on the islands. Initially, it was made with raw reef fish, seasoned with sea salt and seaweed, and combined with crushed candlenut.

What is arctic char

Arctic Char have a rich taste with a flavor profile somewhere between trout and salmon with a fat content close to that of sockeye salmon. The flesh ranges in color from light pink to deep red with moderately firm but fine flakes. The skin is is thin and delicate, is easy to crisp-up and is edible.

If you are a skilled chef you should know a little about the history of Poke. It’s believed that poke was first prepared by native Polynesians centuries before Western travelers arrived on the islands. Initially, poke was made with raw reef fish, seasoned with sea salt and seaweed, and combined with crushed candlenut.

White Zinfandel, is the classic go to wine for beginners. It is known for its sweet taste and its ease of drinking. While many of us start drinking White Zinfandel, eventually they move on to more sophisticated wines as your taste buds expand. White Zinfandel is an american wine started in the 70s when California’s Sutter Home was attempting to create a new red wine that would make a dent in the white wine dominated market. Their red wine came out as a sweet pink wine, and they decided to bring it to market anyway, and it became a hit.

To tone down some of the sweetness of White Zinfandel, try pairing it with a firm, dense fish like tuna, preferably grilled and in steak form. With a dense fish, the hidden flavors of Zinfandel  begin to make an appearance. Your taste buds will be very pleased with the spicy oak or blackberry flavors in this wine.

If you’re grilling or broiling thick fish steaks, marinate it for 15 minutes in lemon or lime juice. The acid from the juice “cooks” the fish a bit, cutting down on the time it needs to stay on the heat. This helps prevent you from drying out your fish.

If you’re pan-searing your fish: Make sure to pat it completely dry before adding it to the pan. A general rule for searing any type of fish is to dry it before you cook it. fish is considered especially moist, so this is extra important. Just pat your fillet dry with a paper towel before searing it and you’ll be one step closer to having an amazing meal 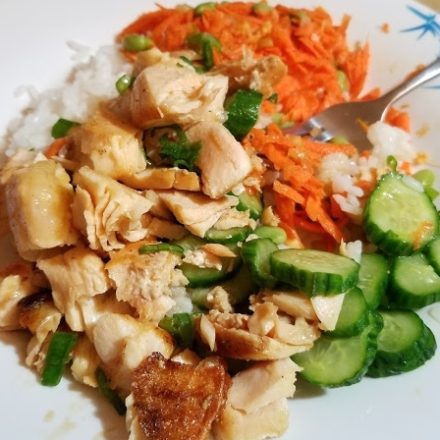 NUTRITION PER SERVING
Calories 480kcal, Fat 13.6g, Proteins 43.1g, Carbs 39.7g ALLERGENS
May contain traces of allergens.
December 12, 2022The Rise of the Mini Cocktail and Why You Need to Try One
If you've been to a bar or restaurant lately, you may have …
December 12, 202210 Must-Have Gifts for the Holidays in 2022
It's hard to believe that it's almost time for the holidays! With …
December 12, 2022Top 6 smartwatches of 2022
As the world continues to move forward technologically, it's no surprise that …
December 11, 2022The 6 best wireless headphones in 2022
If you're looking for the best wireless headphones in 2022, you've come …
December 11, 2022Top 6 Subscription Boxes for women’s gift ideas
Picking out the perfect gift can be tough, but with these top …
December 11, 2022Top 6 Subscription Boxes for Men gift ideas
Is your man in need of a little gift inspiration? Why not …
October 29, 2022House of the Dragon – Season 1 Review
I was so excited when I found out that HBO was going …
October 29, 20225 reasons why you should watch House Of The Dragon
If you're a fan of Game of Thrones, then you'll definitely want …