Nachos first appeared in 1943 in Piedras Negras, a small Mexican city very close to the U.S. military base Fort Duncan, in Texas. A group of about a dozen U.S. military wives had spent a day shopping in Eagle Pass when they decided to stop for some dinner. All nearby restaurants were closed.

The maître d’hôtel at the old Victory Club in Piedras Negras, Ignacio “Nacho” Anaya felt sorry for the women. He decided to create a new snack for them. With what little he had available in the kitchen, tortillas and cheese. Anaya cut the tortillas into triangles, fried them, added shredded cheddar cheese. Added sliced pickled jalapeño peppers and put the concoction in the oven for a couple of minutes.

He then served the inventive snack to the ladies, naming it after himself—Ignacio, or rather the nickname Nacho. Hence, ‘Nachos Especiales. As word of the dish traveled, the apostrophe was lost, and Nacho’s “specials” became “special nachos”

Ignacio Anaya died in 1975. In his honor, a bronze plaque was erected in Piedras Negras, and October 21 was declared the International Day of the Nacho.

Chicken breasts should not be thicker than 1-inch, max. If your chicken breasts are thick, use a meat mallet or rolling pin to pound the chicken to a smaller and even thickness BEFORE cooking.RELATED RECIPE:  Hoisin Chicken Recipe with Buttery Soy Noodles

DO NOT stir or move the chicken breasts around while cooking. Let cook for 5 minutes or until you can easily flip them over. If there’s any resistance when trying to flip them, give it another minute before trying again.

Moscato wine is low in alcohol, sweet and a little bit fizzy. It is filled with aromas like vanilla, peach, jasmine and caramel. Some people consider Moscato as a dessert wine, I like to serve it with the main course. Because of  its sweet, mild flavors, pairing Moscato with a Mexican or spicy dish. 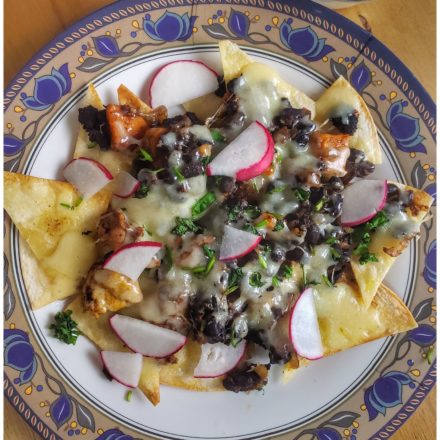